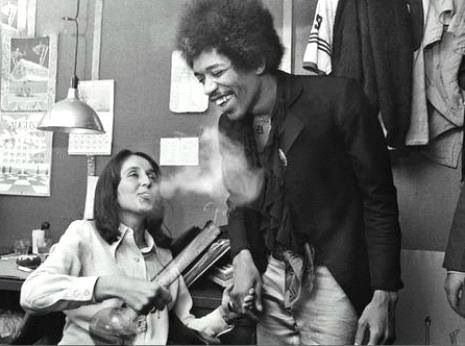 Perhaps no other rock-and-roll trailblazer has been as original or as influential in such a short span of time as Jimi Hendrix. Widely acknowledged as one of the most daring and inventive virtuosos in rock history, Hendrix pioneered the electric guitar (he played a right-handed Fender Stratocaster upside-down and left-handed) as an electronic sound source capable of feedback, distortion, and a host of other effects that could be crafted into an articulate and fluid emotional vocabulary. Although he was on the scene as a solo artist for less than five years, Jimi Hendrix is credited for having a profound effect on everyone from Miles Davis to Stevie Ray Vaughan.

He was born Johnny Allen Hendrix on November 27, 1942 in Seattle, Washington, a black American of African, European, Cherokee Indian and Mexican descent. An unsettled home environment made Jimi spend much of his early years staying with his grandmother, a full-blooded Cherokee Indian, in Canada.

Hendrix's father, James "Al" Hendrix, later changed his son's name to James Marshall Hendrix. His mother died when Jimi was 10, about the same time as Jimi began to take a serious interest in music and playing the guitar. When he was 12 he got his first electric guitar - the instrument which shaped the next 16 years of his life. At the age of 16, Jimi was thrown out of school, apparently for holding the hand of a white girl in class.

He slung his guitar over his back and left home to enlist in the Army, where he served as a parachute jumper until he was discharged in 1962. Hendrix began working as a session guitarist under the name Jimmy James, supporting such marquee acts as Sam Cooke, Ike and Tina Turner, and the Isley Brothers. After working extensively with Little Richard in 1964, Hendrix became entangled in a contract dispute with the mercurial artist and left to form his own band, Jimmy James and the Blue Flames. With the exception of an obscure single, "My Diary," with Arthur Lee (later of the L.A. psych band "Love"), none of the music Hendrix cut with other artists was made more remarkable by his presence.

After playing Greenwich Village coffeehouses for the better part of a year (still under the moniker Jimmy James), Hendrix encountered Chas Chandler, of The Animals fame, at a New York club. Impressed with his playing, Chandler, who was then looking to switch gears to management, took Hendrix to London in the fall of 1966 and masterminded the creation of the Jimi Hendrix Experience. Backed by Noel Redding on bass and Mitch Mitchell on drums, the Experience offered Hendrix the wide-open rock-and-roll format he needed to exercise his dazzling skills as a guitarist, singer, and songwriter. Chandler unleashed the band on the London pop scene, and in short order Hendrix et al became the talk of the town.

Aside from playing the guitar behind his head or with his teeth, Hendrix was renowned for setting his instrument on fire during his performances. The first time he set his guitar ablaze was on March 31, 1967, during a show at Finsbury Park in London. That year also marked the release of his first single, "Hey Joe," which went to #6 and lasted ten weeks on the U.K. charts. It was followed in quick succession by "Purple Haze" (#3), "The Wind Cries Mary" and the trio's ferocious debut album, "Are You Experienced?", which featured those tracks and the Hendrix staples "Foxy Lady" and "Manic Depression".

Hendrix's popularity Stateside was a bit slower in igniting, but "Are You Experienced?" finally broke through in a major way after a defining moment at the famed Monterey Pop Festival when the notoriously outlandish frontman created a sensation by coaxing flames from his Stratocaster during the band's performance. Throughout the next year, Hendrix's eclectic psychedelia reached a zenith with two albums, "Axis: Bold as Love" and "Electric Ladyland" - the latter ranks as one of the greatest albums of the rock era. But the Experience at the top didn't last long - Hendrix and bassist Redding grew apart, and muddled by over-indulgence in drugs and groupies, Hendrix came to believe - wrongly - that his management was cheating him. In 1969, the Experience disbanded.

In the summer of 1969, Hendrix played Woodstock with an informal ensemble called Gypsy Sun and Rainbows, in a performance highlighted by another career-defining moment: a startling, renegade rendition of "The Star Spangled Banner." Hendrix subsequently formed "the Band of Gypsies", with old army friend Billy Cox on bass and Buddy Miles (Electric Flag) on drums. The band's New Year's Eve concert at the Fillmore East in New York City provided them with material for their first album, "Band of Gypsies" (a second album, titled "Band of Gypsies 2", was discovered and released in 1986). Hendrix brought Mitch Mitchell back into the fold in mid-1970 to begin work on a new double album Jimi had tentatively titled "First Rays of the New Rising Sun". Several tracks were recorded for the project, but the sessions were sandwiched between tour dates, and, sadly, the album was left unfinished when Hendrix died September 18, 1970.

A German girl named Monika Danneman gave her version of what happened to Hendrix. Jimi arrived at her flat on Tuesday. What happened on Wednesday isn't clear but Thursday she describes as being taken up with shopping and taking photos.

They got home about 8:30 p.m. Monika prepared a meal. They shared a bottle of wine and talked and played music until 1:40 or 1:45 a.m. when Hendrix said he had to go out and see some people. Monika could not go with him but she could take him there and bring him home. She picked him up again around 3:00 a.m. On their return to the flat, Monika made Jimi a tuna fish sandwich. The two of them went to bed and talked until 7 a.m. when Monika took a sleeping pill and fell asleep.

Some time after, Hendrix took at least eight, possibly nine of the same tablets. Monika woke around 10.20. Hendrix was sleeping normally. She had planned to go out for cigarettes but just before leaving, she noticed vomit on Jimi's nose and mouth. She tried to wake him but couldn't and called a friend to ask what to do. An ambulance was called. It arrived about 11.20 a.m. Hendrix was seated upright in the back with no head support. Sometime in the next twenty-five minutes before they arrived at St. Mary Abbot's Hospital, Jimi Hendrix choked on his own vomit. He was pronounced D.O.A. The pathologist reported a large amount of Seconol in Jimi's blood but no reason to assume that suicide was the cause of death. The cause of death noted on the coroner's report was inhalation of vomit after barbiturate intoxication.

In 1971, several of the tracks intended for "First Rays" were compiled and released as "The Cry of Love", and the ensuing years have witnessed a flood of releases of Hendrix tributes, books, videos, and albums, including pre-fame barrel-scrapings of Hendrix takes from his pickup guitarist days. In the late '70s, audio engineer Alan Douglas grafted backup instrumentation onto incomplete Hendrix guitar tracks to a pale effect. In 1994, M.C.A. released three Hendrix thematic compilations, one ("Jimi Hendrix: Blues") devoted to blues, another ("Jimi Hendrix: Woodstock") to his Woodstock performance, and a third ("Voodoo Soup") that represented an attempt to posthumously recreate Hendrix's unfinished studio album. Despite these transgressions against his nearly faultless musical legacy, Hendrix's innovations and soul live on in the playing of every rock-and-roll guitarist.

In 1993, the investigation into Hendrix's death was reopened by Scotland Yard, but when no new evidence was unearthed, the matter was dropped.

The Jimi Hendrix Experience's bassist, Noel Redding, died at his home in Ireland of unknown causes on May 11, 2003, at the age of 57. Drummer Mitch Mitchell was found dead in a Portland, Ore. hotel room on November 12, 2008. He was 62.

When Jimi died, he left no will and his father, Al, had to sue for the rights to Jimi's music, which he won in 1995. When Al died in 2002, the Hendrix estate was worth about $80 million and Jimi's brother, Leon sued Jimi's adopted daughter Janie, the surviving heir. After a three month trial, King County Superior Court in Washington handed down small victories for both sides.

November of 2012 brought the news of yet another Hendrix album, made up of unreleased tracks, slated to be issued in March of 2013. The official Hendrix website described the effort as "fresh diversions from his legendary guitar work", trying out horns, keyboards, percussion and a second guitar.

In July, 2014, after decades of litigation, a deal was finally been struck between Experience Hendrix LLC and Legacy Recordings, the catalog wing of Sony Music Entertainment, in respect to some early master recordings that Hendrix made with Curtis Knight And the Squires in the mid-'60s. 88 'live' and studio tracks were to be re-mastered and released in definitive new editions. In August, news came that Hendrix's first two posthumous studio albums, "The Cry of Love" and "Rainbow Bridge", which both originally released in 1971, will be available as newly re-mastered CD, LP and digital reissues in September.

In late October, 2015, news came that the London flat where Jimi Hendrix spent a year of his life in the late '60s would open to visitors in February, 2016, as part of a public exhibition. 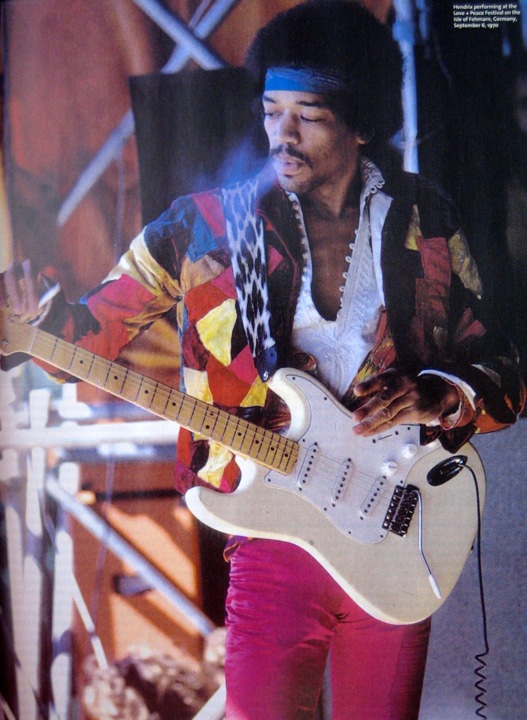