The roots of the Grateful Dead lie with singer / songwriter Jerry Garcia, a long-time bluegrass enthusiast who began playing the guitar at age 15. Garcia moved to Palo Alto, CA, in 1960 and by 1962, he was playing banjo in a variety of local folk and bluegrass outfits, forming his own band, "Mother McCree's Uptown Jug Champions", with guitarist Bob Weir and keyboardist Ron "Pigpen" McKernan in 1964. The next year, now calling themselves "The Warlocks", the band's line-up also included Phil Lesh on bass and Bill Kreutzmann on drums.

By July of 1965, the group had attracted the attention of Ken Kesey, who hired them as the house band at his notorious Acid Tests, a series of now-legendary public LSD parties and multimedia "happenings" that took place prior to the drug's criminalization. As the year neared its end, the Warlocks were searching for a new name. A number of conflicting stories about how the band chose "The Grateful Dead" have arisen over the years. The most popular one is that the name was chosen from a randomly opened copy of the "Oxford Companion To Classical Music", while others say it was from a Funk & Wagnells dictionary. Another theory that it came from the "Egyptian Book Of The Dead" has been denied by every member of the band.

The band members soon moved into a communal house situated at 710 Ashbury Street in San Francisco, becoming a fixture on the local music scene and building a large fanbase on the strength of their many free concerts. Signing to MGM in 1966, the Dead recorded their first demos. The sessions proved disastrous, and the label dropped the group a short time later.

As 1967 rolled around, the Dead emerged as one of the top draws on the Bay Area music scene, honing an eclectic repertoire influenced by folk, country and the blues, while regularly appearing at top local venues including the Fillmore Auditorium, the Avalon Ballroom and the Carousel. In March of 1967, the Dead issued their self-titled Warner Bros. debut LP, a disappointing effort which failed to recapture the spirit of their live appearances. After performing at the Monterey Pop Festival, the group expanded its line-up with the addition of second drummer Mickey Hart and a second keyboard player, Tom Constanten, to accompany the unstable McKernan, who had by now, a severe drinking problem.

The band's second album, 1968's "Anthem of the Sun", fared better in documenting the free-form jam style of their concerts, but after completing 1969's "Aoxomoxoa", their penchant for time-consuming studio experimentation left them over $100,000 in debt to Warner Bros.

Needing to raise some serious cash, the band decided to take the suggestion of many of their fans and record their first 'live' album. The result was 1969's "Live/Dead" which was highlighted by a 23 minute version of Garcia's "Dark Star". For many, this one song was the epitome of what the band were all about. The LP succeeded where its studio predecessors had failed in capturing the true essence of the group in all of their improvisational, psychedelicized glory.

"Live/Dead" was followed in 1970 by a pair of now classic studio efforts, "Workingman's Dead" and "American Beauty", that featured the group's country and folk roots. The two albums remained the cornerstone of the Dead's live shows for years to come, with its most popular songs, "Uncle John's Band," "Casey Jones," "Sugar Magnolia" and "Truckin'", becoming much played favourites on FM radio. These two outstanding albums were like sister and brother, and broke the band to a much wider audience.

Despite the success of the two studio albums, the Dead reverted to releasing live sets by issuing a second, self-titled double album (originally called "Skullfuck"), followed by the triple disc, "Europe '72". As more and more of their psychedelic-era contemporaries packed it in, the group continued attracting greater numbers of fans to their shows, many of them following the Dead across the country. Calling themselves "Deadheads," these fans became notorious for their tie-dyed fashions and excessive drug use, their travelling circus ultimately becoming as much the focal point of concert dates as the music itself. The band's live concerts were also extensively bootlegged, and not surprisingly, the Dead closed out their Warner Bros. contract in 1972.

After years of ill health through alcohol abuse, Ron "Pigpen" McKernan died of liver failure on March 8, 1973. He was replaced by Keith Godchaux from Dave Mason's band, who, together with his wife Donna on vocals, compensated for the loss of Pigpen.

"Wake Of The Flood", released in 1973 on the new Grateful Dead Records, featured a jazz influence and proved to be the band's most commercially successful album to date. Following, 1974's "Grateful Dead from the Mars Hotel", the group took a hiatus from the road to allow its members the opportunity to pursue solo projects. After returning to touring in 1976, the Dead signed on with Clive Davis' Arista Records and released "Terrapin Station", the first in a series of misguided studio efforts. As a touring band, the Grateful Dead continued to prosper, but their studio albums began to lose direction.

Although Keith and Donna Godchaux had been with the band for several years, they had never truly fit in. Donna often sang off-key, resulting in some embarrassing live performances, while Keith began to use hard drugs. The pair were politely were asked to leave the band at the end of 1979. Keith was later killed in an auto accident on July 21, 1980.

With new keyboard player Brent Mydland, the Dead released "Go To Heaven" in 1980. The album is considered by most fans to be the weakest effort in the group's catalogue, betrayed by a hint of disco-pop. The cover showed the band posing in white suits which prompted "Deadheads" to wonder if the band had gone soft. Ironically, it was this disappointing record that spawned their first, although minor success on the US singles chart with "Alabama Getaway". The album was such an artistic and commercial failure that the band would not re-enter the studio for another seven years.

All of the band had experimented with drugs for many years and, unlike many of their contemporaries, had survived. Garcia however, was addicted to heroin by 1982. This retrospectively explained his gradual decline as a guitarist, together with his often weak and shaky vocals. Garcia eventually collapsed and came close to death when he went into a diabetic coma in July, 1986, regaining consciousness five days later.

By 1987, the Dead were widely regarded as little more than an enduring cult phenomenon prior to the release of 1987's "In the Dark". The album became the year's most unlikely hit and the single "Touch of Grey" became the first-ever Dead track to reach the Top Ten on the pop charts. Suddenly their videos were in regular rotation on MTV, and virtually overnight the ranks of the Deadheads grew, with countless new fans flocking to the group's shows. Not only did concert tickets become increasingly tough to come by for long-time followers, but there were also more serious repercussions. The influx of new fans shifted the crowd dynamic considerably, and once-mellow audiences became infamous not only for their excessive drug habits, but also for their violent encounters with police.

Despite Garcia's health problems, the Dead spent more time on tour than ever, with a series of dates with Bob Dylan yielding the live album "Dylan and the Dead". As much a cottage industry as a band, they travelled not only with an enormous road crew but also dozens of friends and family members, many of them Dead staffers, complete with health insurance and other benefits. The Grateful Dead were consistently ranked as one of the music industry's top money makers.

The group issued another studio album in 1989, a rather dull effort called, "Built to Last". Tragedy struck in October of that year when a fan died after breaking his neck outside of a show at the New Jersey Meadowlands. Two months later, a 19-year-old fan on LSD also died while in police custody at the Los Angeles Forum.

On July 26, 1990, keyboard player Brent Mydland died from a lethal combination of cocaine and morphine, the third keyboardist in group history to perish. He was replaced not only by former Tubes keyboardist Vince Welnick but also by satellite member, Bruce Hornsby, a long-time fan who frequently toured with the group. In the autumn of 1992, Garcia was again hospitalized with diabetes and an enlarged heart, forcing the Dead to postpone their upcoming tour until year's end. He eventually returned, looking more fit than he had in years. Still, few were surprised when it was announced on August 9, 1995 that Garcia had been found dead in his room at a substance abuse treatment facility in Forest Knolls, California. The 53-year-old's death was attributed to a heart attack.

While Garcia's death spelled the end of the Dead as a continuing creative entity, the story was far from over. As the surviving members disbanded to plot their next move, the band's merchandising arm went into overdrive. In addition to "Dick's Picks", a series of over 25 archival releases of classic live material, licensed products ranging from Dead t-shirts to sporting goods to toys flooded the market. Plans were also announced to build Terrapin Station, an interactive museum site. At a press conference in December 1995, the remaining band members announced that they would bury the band name along with Garcia.

In 1996, Weir and Hart mounted the first "Furthur" festival, a summer tour headlined by their respective bands Ratdog and Mystery Box. In 1998, they also reunited with Lesh and Hornsby to tour as the "Other Ones".

On August 3rd and 4th, 2002, surviving members Bob Weir, Mickey Hart, Bill Kreutzmann, and Phil Lesh performed at the Alpine Valley Music Theatre in East Troy, Wis. for a weekend they called "A Grateful Dead Family Reunion". Bassist Phil Lesh told the press he was "stoked to the eyeballs" about the reunion with his former bandmates following rehearsals. "Since we really couldn't recreate the Grateful Dead," he said, "we wanted to apply all the evolution that everybody has gone through in the last seven years and apply all the things we've learned through playing with others to playing together".

Officials of Walworth County at first denied promoters a licence to hold the concerts, fearing authorities couldn't handle the estimated 200,000 people that might have tried to attend. A new plan was submitted with tighter security and emergency procedures and the 35,000 tickets that were available for each day, sold out quickly. Security guards gave out garbage bags as cars entered the grassy parking lot, along with a set of rules: no selling, no fires or fireworks, no cooking, no camping. Thousands of Deadheads hung out in the grassy lot outside the amphitheatre, listening to Grateful Dead music, eating and visiting.

Although Garcia is gone, The Grateful Dead have left their loyal legion of fans a musical legacy that will be treasured for years. They were ranked 57th in the issue The Greatest Artists of all Time by Rolling Stone magazine. From 2003 to 2009, former members of the Grateful Dead, along with other musicians, toured as The Dead. In 2006, the Grateful Dead signed a ten year licensing agreement with Rhino Entertainment to manage their business interests, including the release of recordings, merchandising and marketing. In 2011, Rhino and Grateful Dead Productions began working with Curious Sense to develop an online game built on the band's legacy, with band members retaining creative control and ownership of the music catalog.

On June 18, 2015, Jerry Garcia was inducted posthumously into The Song Writers Hall Of Fame alongside the band's lyricist Robert Hunter. The four surviving members of the band ended their 50-year-run on July 5th, 2015, at Chicago's Soldier Field in front of over 70,000 fans. The show came twenty years after the death of lead guitarist, Jerry Garcia, who played his last show in the nation's third-largest city in 1995. In October, 75-year-old Phil Lesh announced via Facebook that he had been diagnosed with bladder cancer, but was expected to make a full recovery. 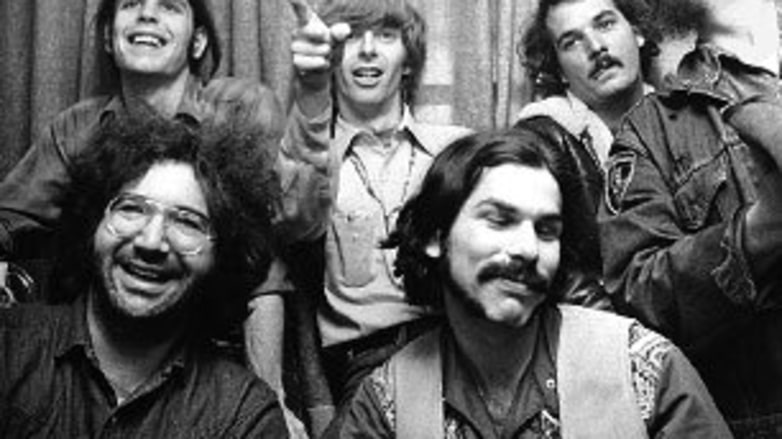