The foundation for The Hollies was laid in Manchester England in 1962 by childhood friends Allan Clarke and Graham Nash. They had already been singing together locally for a number of years as a semi-professional duo under a number of names such as the Guytones, the Two Teens and Ricky And Dane. They enlarged the group by adding Eric Haydock and Don Rathbone to became the Fourtones and then The Deltas. Following the recruitment of local guitar hero Tony Hicks from a band called The Dolphins, they became The Hollies. According to those close to the band, they chose the name from some Christmas holly decorating Graham Nash's house, not in homage to Buddy Holly, as a long time rumor has it.

Almost immediately they were signed to the same label as The Beatles, the prestigious Parlophone. Their first two singles were covers of the Coasters' "(Ain't That) Just Like Me" and "Searchin'". Both made the UK charts and the group set about recording their first album. At the same time, Rathbone left to become their road manager and was replaced by Bobby Elliott from Shane Fenton And The Fentones. Although their first singles were released in 1963, The Hollies were unable to ride that first tidal wave of British Invasion hysteria that started a year later. Once they found their true stylistic niche however, on 1964's "Here I Go Again", that smooth Hollies vocal blend so prominent in early UK smashes "I'm Alive" and "Look Through Any Window", was here to stay. Their first stateside hits, with Bernie Calvert on bass replacing Haydock, didn't come until 1966, when "Bus Stop" and "Stop Stop Stop" shot into the US top ten.

The group's excellent live performances throughout Britain had already seasoned them for what was to become one of the longest beat group success stories in popular music. Their first two albums contained the bulk of their live act and both albums became long-time residents in the UK charts. Meanwhile, the band was enjoying a train of hits that continued from 1963 to 1974, and their popularity almost rivalled that of The Beatles and Rolling Stones. Infectious, well-produced hits such as Doris Troy 's "Just One Look", "Here I Go Again" and the sublime "Yes I Will" all contained their trademark soaring harmonies.

The voices of Clarke, Hicks and Nash combined to make one of the most distinctive sounds to be heard in popular music. As their career progressed, the trio developed into a strong songwriting team, and wrote most of their own b-sides (under the pseudonym L. Ransford). On their superb third collection, "Hollies" in 1965, their talents blossomed with "Too Many People", an early song about over-population. Their first UK number 1 came in 1965 with "I'm Alive" and was followed within weeks by Graham Gouldman's uplifting yet simple take. "Look Through Any Window". By Christmas 1965 the group experienced their first lapse when their recording of George Harrison's "If I Needed Someone" just scraped the UK Top 20 and brought with it some bad press. Both The Hollies and John Lennon took swipes at each other, venting frustration at the comparative failure of a Beatles song.

Early in 1966, the group enjoyed their second number one, "I Can't Let Go", which topped the New Musical Express chart jointly with the Walker Brothers', "The Sun Ain't Gonna Shine Anymore". "I Can't Let Go", co-written by Chip Taylor, had already appeared on the previous year's "Hollies" album and was one of their finest recordings, combining perfect harmonies with some exceptionally strong, driving guitar work. The moody and troublesome Eric Haydock was fired in April 1966 and was replaced by Hick's former colleague in the Dolphins, Bernie Calvert. The Hollies success continued unabated with Graham Gouldman's "Bus Stop", the exotic "Stop! Stop! Stop!" and the peppy "On A Carousel", all UK Top 5 hits, and at last became major hits on the U.S. charts.

The Hollies were quick to join the flower power bandwagon as a more progressive feel had already pervaded their recent album, "For Certain Because", but with "Evolution", their beads and kaftans were everywhere. That same year (1967) the release of the excellent LP "Butterfly" showed signs of discontent. Inexplicably, the album failed to make the charts in either the UK or the U.S. It marked two distinct types of songs from the previously united team of Nash/Clarke/Hicks. On one hand, there was a Clarke-influenced song, "Charley And Fred", and on the other an obvious Nash composition like "Butterfly". Nash took a more ambitious route. His style was perfectly highlighted with the exemplary "King Midas In Reverse", an imaginative song complete with brass and strings. It was, by Hollies standards, a surprising failure (UK number 18).

The following year, 1968, during the proposals to make an album called "Hollies Sing Dylan", Nash announced his departure to form Crosby, Stills And Nash. His replacement was Terry Sylvester of The Escorts. Clarke was devastated by the departure of his friend of more than 20 years and after seven further hits, including "He Ain't Heavy He's My Brother", Clarke decided to leave for a solo career. The band soldiered on with the strange induction of Mickael Rickfors from Sweden. In the USA, the million-selling "Long Cool Woman (In A Black Dress)" narrowly missed the top spot, ironic also because Allan Clarke was the vocalist on this older number taken from the successful album "Distant Light". Clarke returned after recording two very average albums. The return was celebrated with the worldwide hit, "The Air That I Breathe", composed by Albert Hammond.

Over the next five years, The Hollies pursued the supper-club and cabaret circuit as their chart appearances began to dwindle. Although their albums were well produced, they were largely unexciting and sold poorly. In 1981, Sylvester and Calvert left the group. Sensing major problems ahead, EMI suggested they put together a Stars On 45-type segued single. The ensuing "Holliedaze" was a hit, and Graham Nash was flown over for the television promotion. This reunion prompted the album, "What Goes Around", which included a minor hit with the Supremes' "Stop In The Name Of Love". The album was justifiably slammed by the critics, and only made the U.S. charts because of Nash's name. Following this, The Hollies went back to the oldies circuit until, in 1988, a television beer commercial used "He Ain't Heavy", and once again they were at the top of the charts for the first time in over a dozen years. In 1993 they were given an Ivor Novello award in honor of their contribution to British music.

Three of the core members, drummer Bobby Elliott, lead singer Allan Clarke and lead guitarist Tony Hicks continued to perform as The Hollies until April 2000, when Clarke announced that due to personal reasons he was retiring from the touring incarnation of the group. He was replaced by Carl Wayne, former lead singer of The Move. Wayne stayed with The Hollies until his death from cancer in August 2004. He was replaced by Peter Howarth, who sang lead vocals on the LP "Staying Power", which was released in 2006. Another new studio album "Then, Now, Always", was issued in late March 2009. By that time Alan Coates left the band and was replaced by Steve Lauri.

In recognition of their achievements, the Hollies were inducted to the Rock and Roll Hall of Fame in 2010. In the same year, a compilation album, "Midas Touch: The Very Best of The Hollies", charted in the UK at number 23. In 2012, The band released "Hollies Live Hits! We Got The Tunes!", a live Double CD featuring The Hollies' live performances recorded during their 2012 UK Tour. In 2013, The Hollies 50th year as a band, was packed with a worldwide Anniversary Concert Tour where they performed in over 60 concerts. In 2014 EMI released a 3 CD compilation; "50 At Fifty", which concluded with one new song; "Skylarks", written by Bobby Elliott and Peter Howarth. 2015 and 2016 saw the band still touring, mostly in the UK with an occasional trip to the continent. 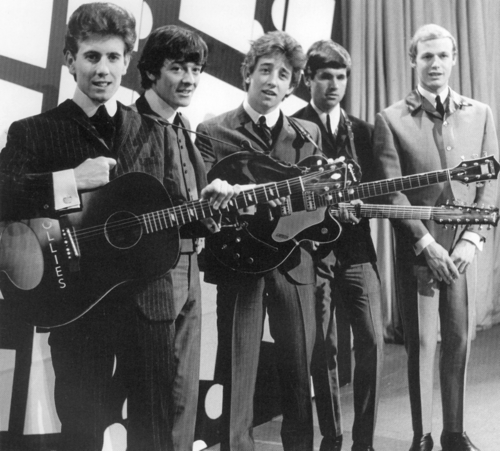