In the latter months of 1967, four shaggy wannabe's congregated in the Southern UK town of Luton, Bedfordshire. From the debris of the disillusioned and disintegrated John Evan Band and McGregor's Engine, the untutored talents of Ian Anderson, Mick Abrahams, Glenn Cornick and Clive Bunker formed the original Jethro Tull line-up.

This early combo had many different names which usually changed every week in order to get re-booked in the clubs where they aspired to find fame and fortune. Their agent, who had studied history at college, came up with the name Jethro Tull (an eighteenth century English agricultural pioneer, who invented the seed drill).

As the group became tighter, they landed the job of house band at London's famous Marquee club and made their recording debut in March of 1968 with "Sunshine Day". This commercially minded single, erroneously credited to Jethro Toe, merely hinted at developments about to unfold.

By the spring of '68, they had built a following as the new face of the blues-based British underground music scene. Lines stretched around the block on a Thursday night when they performed at the Marquee. Ian Anderson would typically join the line as if to buy a ticket himself, wearing the shabby hand-me-down overcoat which was to become his trademark for the next few years. Often, he would be seen with a Woolworth's carrier bag containing flute , harmonicas, alarm clock and hot water bottle, in strange precursor role of the Aqualung/tramp persona. His exaggerated gestures, long, wiry hair, ragged coat and distinctive, one-legged stance cultivated a compulsive stage personality to the extent that, for many spectators, Jethro Tull was the name of this extroverted frontman and the other musicians merely his sidemen.

Following appearances in Hyde Park and at the Sunbury Jazz and Blues Festival in the summer of '68, the band gained wider public recognition with the release of their first album "This Was" which, while paying homage to the blues heritage which they all revered, hinted at the broader influences which were to become apparent in the post-Mick Abrahams times to follow.

After the personal and musical differences which marked the then acrimonious separation, Mick Abrahams left to form the briefly successful Blodwyn Pig. The remaining Tull members embarked, with the then unproven addition of replacement Martin Barre, on the recording of the landmark album "Stand Up" at the beginning of 1969.

Happily, the new record proved to be a great success, and lead the way to new opportunities in Europe and the USA. Ian Anderson's music writing came of age with this album and the influences of classical, jazz, folk and ethnic music forms made the eclectic result an early landmark for the band.

After achieving the position of Number one album in the UK charts, Tull, initially in the shadow of Led Zeppelin and others, began the explosive ascent to the lofty heights of U.S. stardom, culminating during the next three years in the cover stories of Time and Rolling Stone magazines, five nights at the Forum in Los Angeles and three nights at Madison Square Gardens, New York.

A few hit singles livened up the band's career, among them, "Living in the Past", written during the first U.S. tour early in 1969, to keep warm the reputation back home in the UK.

However, it was the albums as a whole which provided the strength for the developing Jethro Tull, containing as they did, not one, but usually several classic rock radio-friendly tracks to keep the band's profile high between concert tours and new releases.

"Benefit", "Aqualung", and the so-called concept albums "Thick As A Brick" and "A Passion Play" confirmed the progressive rock tag which complemented other terms like "Art-rock", "Blues-rock", "Folk-rock", and "Hard-rock", depending on the critics' personal views of the often-complex musical thought trains of flautist and singer, Ian Anderson.

Jeffrey Hammond replaced Glenn Cornick on bass, Barriemore Barlow took over the drum chair from Clive Bunker, and the addition of old school chum, John Evan on piano, made easier the transition from the blues band of '68 to the band of the mid-seventies who sounded like...well, just sounded like Jethro Tull.

The first rock act since the Beatles to perform at Shea Stadium, New York, Tull laid claim to the live concert throne in North America. Not without its share of critical abuse, Tull pushed on with difficult and sometimes controversial themes, often falling into a knowing self-parody and employing humour to lighten up the occasionally bombastic and overly serious subject matter.

With two number one albums in the USA and other world-wide chart and sales success behind them, the band began to remove itself from the more commercially-driven side of recording and touring. Through the latter 70's and into the 80's, they produced several records and tours which, although not replicating their earlier numerical successes, proved throughout the world the enduring artistic credibility of a band continually able to reinvent itself.

"Warchild", "Too Old to Rock and Roll: Too Young to Die", "Minstrel in the Gallery", "Songs from the Wood", and "Heavy Horses" saw the popularity of the band extend into parts of the world where rock music had not before been encouraged and the Tull legend from Buenos Aires to Budapest took root, eventually to be rewarded by the many tours in places where other acts feared, or simply did not care, to tread.

At various times, David Palmer, John Glascock, Dave Pegg, drummer Doane Perry, and more recently, Andrew Giddings on keyboards and bassist Jonathan Noyce, have brought their unique and valuable contributions to the line-up to join the ever-ready mainstay, guitarist Martin Barre who, like Anderson himself, provided the continuity and legacy of the earlier years.

The loyalty of the long-standing fans and the ongoing enlistment of new converts were to ensure the survival of Tull into the eighties and nineties with "Crest of a Knave" ('87) and "Roots to Branches" ('95) being highlights of those decades, together with the Ian Anderson solo flute album "Divinities" providing the first Billboard Magazine number one chart record since 1973.

With 60 million albums sold and over 2500 concerts played in 40 countries, the band continued to record and perform live, albeit on a lesser scale, using a nucleus of Anderson, Barre and Pegg. "Catfish Rising" in 1991, although a disappointing album, was a return to their blues roots. "Roots To Branches" was a return to the standard Tull progressive rock album, full of complicated time changes, and fiddly new age and Arabian intros and codas.

In his time away from the band, Ian Anderson also became a renowned entrepreneur, owning tracts of land on the west coast of Scotland and the highly successful Strathaird Salmon processing plant.

In 2001, Anderson reunited with Cornick, Bunker, and Abrahams for a series of small pub dates. It was the first time the original four members had played together since 1968. In 2004, 2005 and 2006, Jethro Tull were still performing all across the globe. Their 2008 tour, celebrating 40 years of the band, included many older songs as well as guest appearances from former band members and others.

Jethro Tull's 2010 concert schedule took them to Austria, Germany, Greece, Israel, Italy, Norway and Switzerland in July and August, as well as Armenia and the UK in September. Ian Anderson presented an acoustic, solo tour in North America during October and November.

The full band announced a tour of North America in June 2011 in honour of the "Aqualung" album's 40th anniversary. At every show on this tour, the band played the entire album in its entirety. Their 2012 plans had them booked for Europe in the Spring and Summer, Israel in September, before heading to America in November. 2014 brought a new album called "Homo Erraticus", supported by tours of Europe and the United States. In August of that year, original bassist Glenn Cornick died of congestive heart failure at his home in Hilo, Hawaii at the age of 67.


For more, check out WSHE Radio interviews with Ian Anderson and Martin Barre 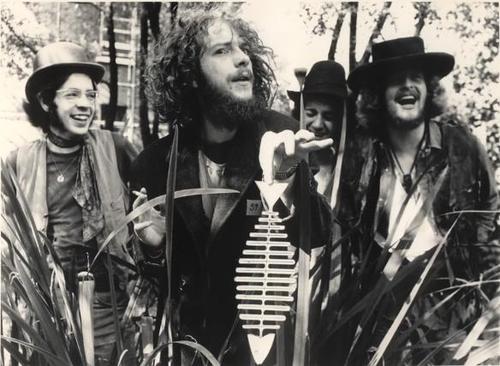